We are proud to announce the release of CKEditor 4.3 Beta. This editor version is packed with new features, including plenty of new plugins and a groundbreaking new feature, Widget System! Since we are introducing so many exciting new features at once, we are releasing a beta version first to let everyone familiarize with them before the final release (that is due in a few weeks).

Widgets are special rich content units in that they are groups of elements which are treated as a single entity inside the editor.

Once developed, their structure (but not necessarily their content) is immutable and enforced by the CKEditor instance they are used in. These entities can thus be selected and deleted or moved freely as a whole around the editing area, keeping their predefined structure intact. At the same time all the individual parts of the widget (its "building blocks") can be edited or configured separately, again, without affecting the whole widget entity and its structure in the process.

Some scenarios where widgets would be most useful are:

Read more about this exciting new feature here. The Widget System is provided in the new Widget plugin that introduces the Widget API which gives you plenty of possibilities to create your own widgets.

The new image plugin is based on the Widget System. It lets you create an image widget with integrated image captions, an option to center images, and dynamic "click and drag" resizing. Creating a captioned image as a widget gives you a number of benefits, like the ability to select, move, and delete the whole unit without the risk of leaving a stray caption behind.

The new Mathematical Formulas plugin introduces the MathJax widget. You can now use it to create or modify mathematical equations using TeX. What's interesting is that you can mix the equations with normal text in a paragraph because the equations can also be inserted inline.

The creation of the Widget System triggered the introduction of a few considerable updates and new features in the CKEditor API. Here is the summary of the most important ones:

Another new feature is the Language plugin that implements the Language toolbar button to support WCAG 3.1.2 Language of Parts. This feature is yet another option that will improve the accessibility of CKEditor. It lets you mark the language of content that you are creating which ensures that user agents can correctly present content written in multiple languages. This makes it possible for user agents and assistive technologies to present content according to the presentation and pronunciation rules for that language.

Last but not least, we introduced new smilies to go along the new CKEditor 4 line and its updated styling. We hope you will like the new editor face(s)! :-) 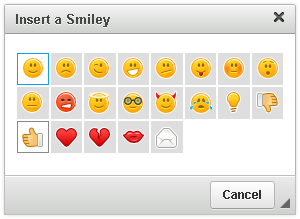 Note: Because CKEditor 4.3 introduces a whole lot of new code, we have decided to release a beta version first. This will give everyone time to learn the new features and try them out.

This Beta release is not available in CKBuilder. It is however also available in a dedicated section of the CKEditor Download page.

If you do not want to install the new version, the CKEditor 4.3 Beta samples are available for everyone to play with.

CKEditor is available in Open Source and Commercial licenses. Full details can be found on our license page.

Please use the CKEditor development website to report issues and suggestions through tickets.

We are really enthusiastic about the new CKEditor version and in particular, about the Widget System. We will be happy to hear from you and thankful for any suggestions that will help us improve this feature and tailor it to your expectations.