Share your plugin with the rest of the community!

Images automatically
rescaled, optimized, responsive and delivered through a CDN.

This plugin allows you to paste content from Microsoft Word and maintain original content formatting. It also adds the Paste from Word toolbar button which makes it possible to paste clipboard data this way only on demand.

Note: This feature was rewritten from scratch in CKEditor 4.6 and is now greatly improved when compared with previous versions in:

The following configuration options are currently provided by this plugin:

For CKEditor versions older than 4.6 the following options were available, too: 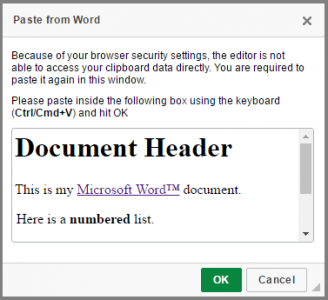 This is an official plugin provided and supported by CKEditor developers.

You can submit bug reports directly to its GitHub issues tracker and discuss any integration issues on StackOverflow.

Note: This add-on is already selected to be a part of your current build.

If you want to add the plugin manually, you will need to: