We would like to let you know that the first developer preview of CKEditor 5 has recently been tagged as version v0.1.0 and is available for everyone to see! We have been working on this project for the past 2 years, building the next generation editor from scratch, closing over 400 tickets – and now we want to share the first tangible milestone with the great community that has supported us throughout this entire time.

We are proud of the progress that we have made, but nonetheless here is the status of the project as of version v0.1.0 – to curb your expectations before you move on to try out the real thing:

At the same time, this is what we managed to achieve:

We created a basic sample that you can play with.

Check out the developer preview of CKEditor 5 (version 0.1.0) on the CKEditor 5 page. 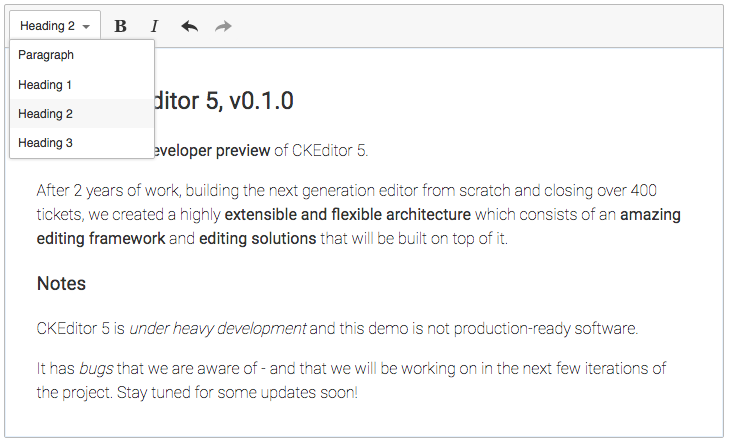 CKEditor 5 is the next generation Open Source editing library that was built based on the 13 years of experience working on FCKeditor, CKEditor 3 and CKEditor 4. It was redesigned and written from scratch, with the following assumptions:

Feel free to refer to our Medium publications for more information about the CKEditor 5 project, technical details, the future of rich text editing and how to fix contenteditable or our thoughts on working on Open Source software.

As in all good things Open Source, the roadmap is publicly available here. The planned work is divided into iterations, each one a few weeks long, and once a milestone is completed, we will tag the repositories to create bundled editor versions. The next two iterations are planned accordingly:

Note: CKEditor 5 implements a multi-repo architecture, so the milestones are defined separately in each repository.

As mentioned before, CKEditor 4 and CKEditor 5 are two separate projects, with two development teams working on them simultaneously. Nothing has changed in this regard — CKEditor 4 has its own roadmap, with plenty of exciting new features coming soon.