Share your plugin with the rest of the community!

Images automatically
rescaled, optimized, responsive and delivered through a CDN.

CKEditor SpellCheck from nanospell.com is an independent spellchecker plug-in for the popular CKEditor web HTML editor.  The spell checker is unique in that it is easy to install on any modern web hosting, does not display advertising pop-ups, and is secure in that it never sends your data 'off-site' for remote processing.

Security of data within a spellchecker is a major concern for any business or individual who want to have their confidential information kept safe. The SpellCheck plug-in  for CKEditor from NanoSpell is different, all spellchecking is performed on your own server - behind your own firewall.  The security advantages are clear for any enterprise with a secure intranet, extranet or admin login area on their website.

In addition 'CKEditor Spell Check' also provides 24 international dictionaries for your use for free.
International dictionaries include:  Afrikaans,Brazilian Portuguese,Catalan,Danish,Dutch (Nederlands),Frisian,French,Gaelic,German,Indonesian,Italian,Norwegian,Malaysian,Portuguese (Portugal),Spanish and Swedish ! You can also choose from many types on English including American English, International English,  British, Canadian , Australian , Medical , Legal and Scientific dictionaries.  Al full list of Ckeditor Dictionary downloads is available online at http://ckeditor-spellcheck.nanospell.com/ckeditor-spellchecking-dictionaries .   The developer may also create their own custom dictionary files, or just add a few proprietary / custom words to the vocabulary using simple plain text files.

API Options also include the ability for you as the developer to control dictionary language, server technology and how to interpret UPPER CASE  and Alph4Numer1c words.

As a developer you probably want to see an example of CKEditor SpellChecker for yourself - so why not try a free online demo with source-code at http://ckeditor-spellcheck.nanospell.com/#try . 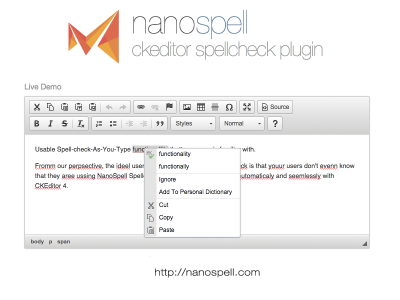 Note: This add-on is already selected to be a part of your current build.

If you want to add the plugin manually, you will need to:

Note: The plugin may have additional requirements. Check the add-on page and documentation for more details.