We would like to let you know that the second developer preview of CKEditor 5 has recently been tagged as version v0.2.0.

The first developer preview of CKEditor 5 was the first demo-able version. Its development took us 2 years and resulted in over 400 closed tickets and, most importantly, the creation of a powerful editing engine, editor architecture and a few basic features.

Such intensive initial development period had to lead to many unclosed businesses and a lot of ideas for refactoring. Hence, in iteration 2 (v0.2.0) we were focused on the most important architecture changes and project cleanup. As a result, in iteration 3 we will be able to focus on rapid feature development.

Thanks to 100% code coverage we were able to perform a huge amount (170 tickets!) of smaller and bigger changes. Here are some more significant ones:

We updated the basic CKEditor 5 sample that you can play with. Check out the developer preview of CKEditor 5 (version 0.2.0) on the CKEditor 5 GitHub.io page. 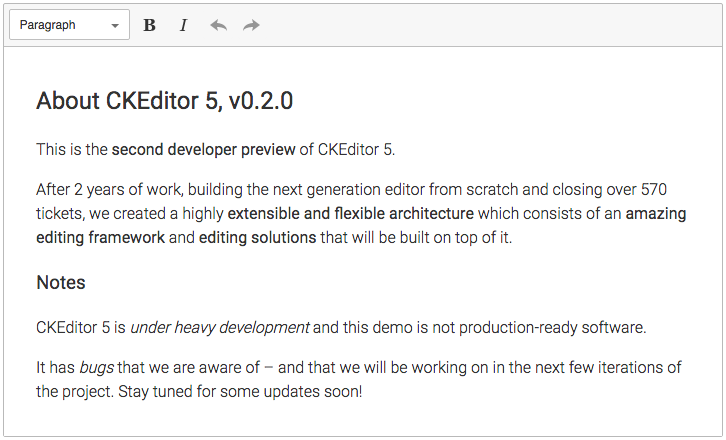 Cleanup that we made in iteration 2 (v0.2.0) will allow us to work on new features in a more stable environment. We already started working on the link, list and clipboard packages. We also plan to work on support for more browsers and fixes for most important bugs.

Feel free to ask questions and join the discussion about iteration 3.