As you can imagine, we’re all very excited about Drupalcon Portland 2013, which started on Monday. Yesterday CKEditor got quite a bit of attention at the convention, and deservedly so; if you didn’t know yet, CKEditor 4 will be included in Drupal 8 core! 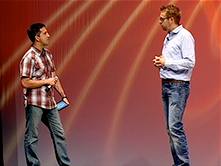 During the convention’s first keynote, which covered topics ranging from Drupal’s ability to integrate into various systems and the project’s current focus on mobile devices, Dries Buytaert summarized the changes expected in Drupal 8. Drupal’s founder started his presentation (60th minute of clip) with the new installer and “re-envisioned” content creation page, which includes CKEditor!

One of the most impressive parts of the demonstration (not biased!) involved Drupal 8’s ability to easily edit posted content with “in-place editing,” or inline editing, as we like to call it. Together with Drupal’s improved article previewing it lets users truly see and edit content as it will appear once published. Inline editing works with entities, nodes, blocks and complex views. It also works on mobile devices.

CKEditor in Drupal allows copy-pasting text from Word while preserving markup, and the ability to easily drag and drop images directly to the text area. The programming crowd got a kick out of both features during the presentation.

Here's how CKEditor looks in Drupal 8. 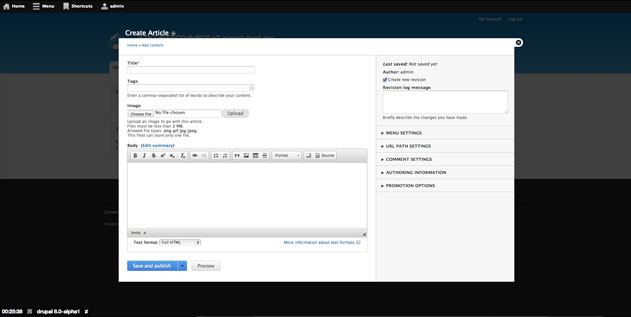 Other notable enhancements include improved language integration, web services that allow exporting every view as XML or JSON, configuration now being in files, and again, better mobile support. In all, loads of cool new stuff contributed by over 1100 contributors!

You can already test the alpha version of Drupal 8! Expect more news about CKEditor at the convention, which lasts until May 24th. Let us know what you think below.

Contact usSign up to Newsletter
New CEO Appointed at CKSource
Share Your Ideas & Solutions and Join Us!