We are happy to announce the final release of CKEditor 4.3 with its groundbreaking new feature, widgets. After a successful stabilization phase following the release of CKEditor 4.3 Beta we are really excited to publish this latest major release containing new plugins and plenty of improvements since the beta version. Make sure you check the amazing Widget System with its rich API and some real-world widget implementations!

Note: By default, no widgets are included in the pre-defined editor presets that you can get from the CKEditor Download site. If you want to add a widget to your CKEditor installation, read the instructions and use CKEditor Builder to add them to your build.

Widgets are the main feature that CKEditor 4.3 introduces. As explained in the beta release post, widgets are special rich content units in that they are groups of elements which are treated as a single entity inside the editor.

Once developed, their structure (but not necessarily their content) is immutable and enforced by the CKEditor instance they are used in. These entities can thus be selected and deleted or moved freely as a whole around the editing area, keeping their predefined structure intact. At the same time all the individual parts of the widget (its "building blocks") can be edited or configured separately, again, without affecting the whole widget entity and its structure in the process.

Widgets as delivered in CKEditor 4.3 are not just a theoretical concept -- we are now also introducing some widget plugins that you can download and use with this editor version, taking advantage of the possibilities that have not been available before. Take for example the Mathematical Formulas widget that you can use to create or modify mathematical equations using TeX. Another one is the Enhanced Image plugin that introduces image captions -- something that used to be impossible in the editor using the default Image plugin.

Improvements Since the Beta Version

One of the features that was absent in the Enhanced Image prototype was file browser integration. No such issues this time -- this has just been added, so you can use the captioned image widget along with your CKFinder instance or another file browser of your choice.

The new Mathematical Formulas widget now has a loading indicator which will show the user that the widget is not inactive and the equations will be displayed in a moment.

Placeholder is now a widget

The need for the introduction of the Widget System was confirmed almost immediately when our development team faced some recent issues with the Placeholder plugin. Interestingly enough, it turned out that this is a perfect use case for widgets -- and so the Placeholder plugin was now completely rewritten as a widget!

Our new CKEditor 4.3 Language plugin got a Remove Language option available right in the toolbar menu. You can see how the option looks in the image below: 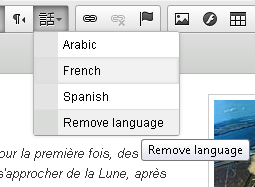 It would be difficult to list the numerous improvements that were introduced to the widget system after the beta version was released, both in the UI, overall handling, and under the hood. Widgets are now better integrated with other editor features and plugins, but also easier to integrate with external systems (for example other dialogs). We have been working a lot on the major widget feature which is drag and drop, fixing lots of edge cases, but also introducing the option to disable dragging if needed. Overall we feel the Widget System is now really mature and are very excited to be able to deliver it to the general public!

We are very proud to offer all these new features to you and to bring the editing experience to the whole new level. In order to make your introduction into CKEditor 4.3 and its Widget System smoother, we have created a few resources that can help you understand and fully appreciate the possibilities that the widgets can give you. Check the following for more information:

CKEditor 4.3 introduces compatibility with Internet Explorer 11 immediately after its release. Check how the editor performs in the latest version of the flagship Microsoft browser!

As explained in the CKEditor 4.3 Beta post, this version brings a few other features and fixes, most notably:

Check out the What's New? page for the full list of changes.

We are really enthusiastic about the new CKEditor version and in particular, about the Widget System feature. The 4.3 Beta brought us a lot of positive feedback, both online and on September's Drupalcon, so we will be happy to hear from you and thankful for any suggestions that will help us improve this feature and tailor it to your expectations.

Please use the CKEditor Development site to report issues and suggestions through tickets.